The Branch has been involved in many aspects of the history of the South Okanagan with a special interest in the old gold mining community of Fairview. 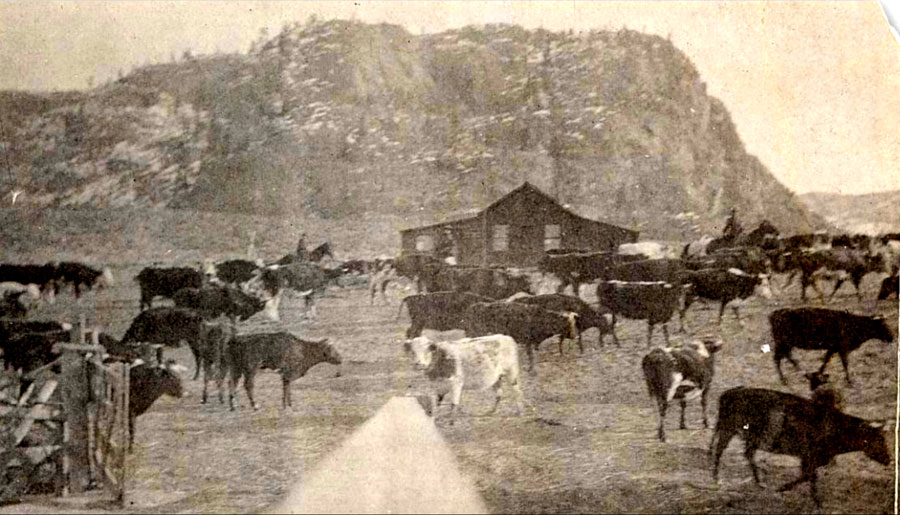 The Historic Haynes Ranch, one of the oldest ranches in the Okanagan Valley, ca 1915. Courtesy Osoyoos Museum 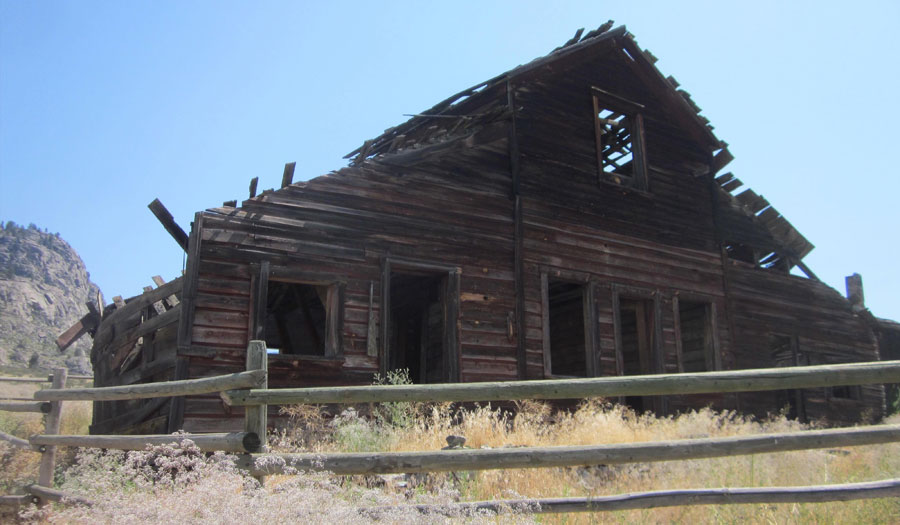 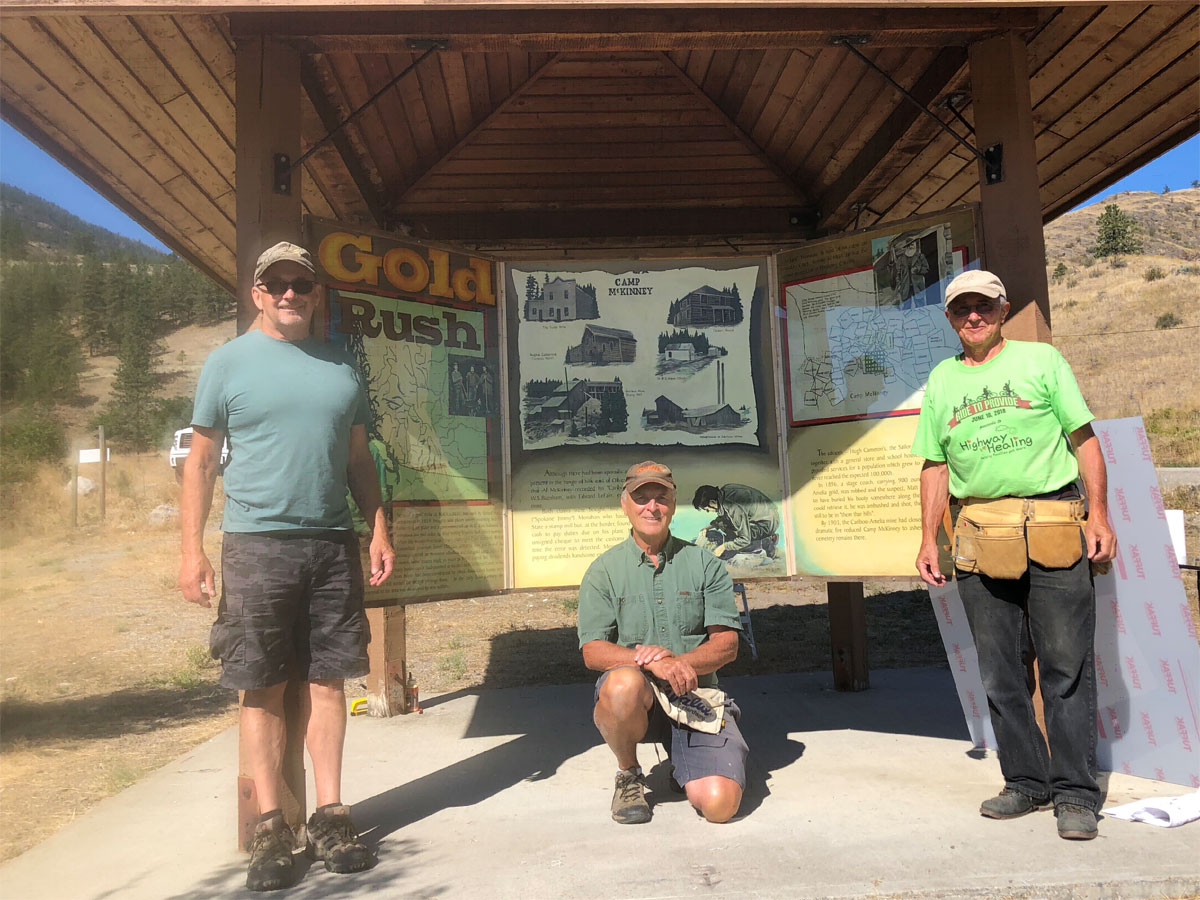 Fairview Kiosk, 2020. Volunteers Bruce Hamilton, Larry Shannon and Ernie Dumais, with three of the twelve restored murals. Courtesy Cheryl Dumais
The murals that had been on display at the Okanagan Historical Society Kiosk in the Fairview town site have been restored and returned to the Fairview Kiosk.

The Fairview kiosk site consists of two adjoining lots that were the site of the Presbyterian Church, constructed at Fairview in 1899. In 1925 the Presbyterian Church was dismantled and moved to Okanagan Falls where it currently serves as the United Church. The windows were covered from the inside and a charge of dynamite was hung from the ceiling and lit. The explosion loosened the nails, making the dismantling of the church possible. As a result of this, it received a nickname, the "Blasted Church".
The Fairview Heritage Town-site Society has tenure on an adjoining 80-acre parcel and has recently completed a major upgrade to a 1.1 kilometre trail that meanders through the old town site. Remains of the town site have faded with time but it is still a very pleasant walk and can be tied in with a visit to view the murals. The trail can be accessed from the Fairview kiosk site or a new parking area on Old Golf Course Road.

The Okanagan Historical Society acquired the Fairview properties from the United Church of Canada in 1970. The present kiosk with the Glenn Clarke murals was officially opened in May of 1997. Over time the murals faded and suffered minor damage. They were taken down late last year and restored by the original artist, who lives in Penticton. New polycarbonate protective coverings have also been purchased and installed. It is interesting that one reason the project took so long to complete is that the demand for (and the cost of) polycarbonate has increased dramatically recently, due to Covid 19 safety requirements. 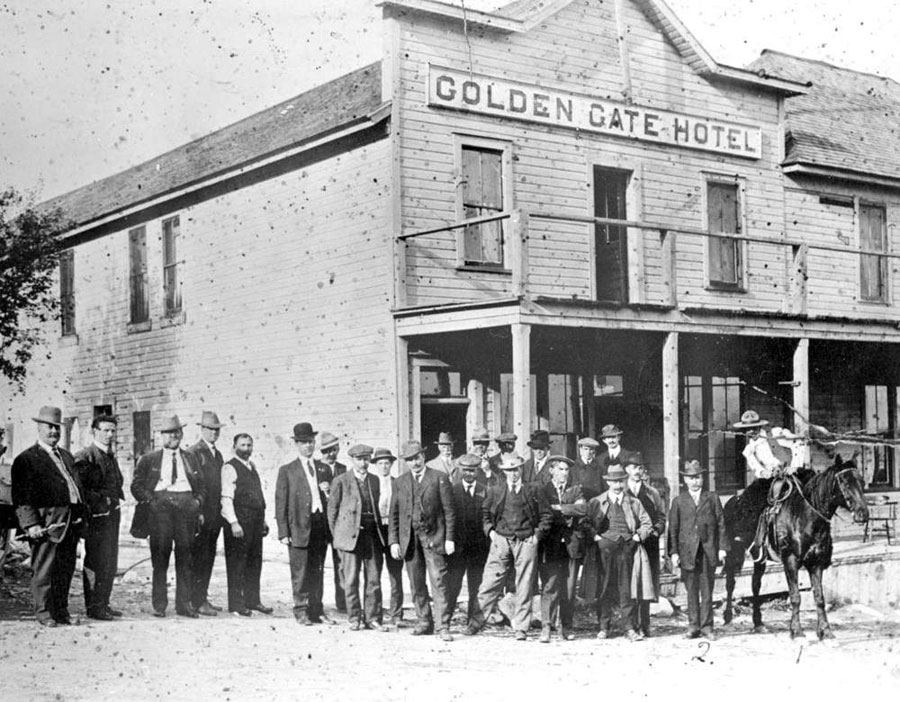 Crowd in front of Golden Gate Hotel, Osoyoos, ca 1899. Val Haynes is on the horse at the right. Courtesy Osoyoos Museum 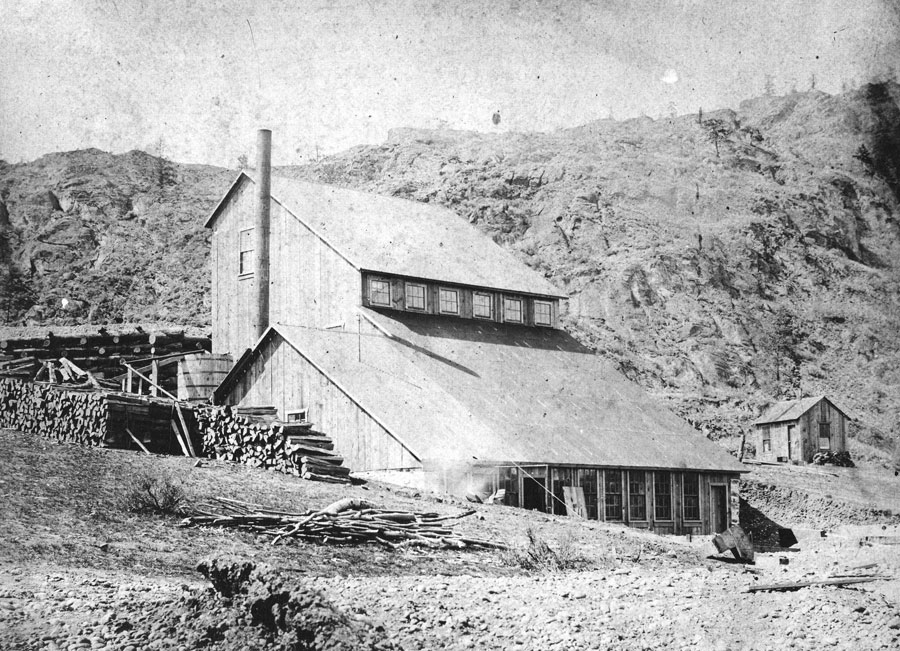 “While Reed and Ryan were the earliest upon the scene, they can scarcely be said to have the honour of discovery. Quartz outcrop they undoubtedly saw, and mineral claims they had, but they turned their backs on the locality leaving nothing to show about their connection except the name Reed Creek. To another set of discoverers must really belong the honour of its [Fairview] discovery as a camp. These were Messrs. George Sheean and Fred Gwatkin, who in the fall of 87 put up stakes on the Stemwinder which is known in camp as the discovery claim.” (Okanagan Miner, Sept. 6, 1893)

The earliest mention of the Stemwinder claim I have seen is in the Kamloops Inland Sentinel: “...The Stemwinder with the several claims adjoining are also valuable properties, showing free gold and considering the amount of development done, the prospects are very satisfactory to the owners.” (May 19, 1889) The Stemwinder became one of the significant mines at Fairview. The development and operation of this mine had many economic cycles, in a similar manner as that of the overall Fairview community.

George Sheehan and Fred Gwatkins sold the Stemwinder for $50,000 in late 1897. The mine continued to operate on and off under different management and ownership teams until 1956. B.C. Government records indicate total production of 103,310 grams of gold and 532,797 grams of silver plus some lead and zinc were taken from the Stemwinder mine. Exploration with rock sampling and structural analyses has continued, most recently in 2019.
(Courtesy Larry Shannon, January 2021)